A double 10" vinyl bootleg, released towards the end of the year 2018, containing the three radio sessions mentioned above.


Beyond question, these sessions have been the source of most bootleg releases featuring The Sisters of Mercy through the years. To get an idea of the multitude of items that contain all of these songs or some of them, please check the representative lists of CDs, LPs or 7"s on the respective sites for Peel Session 82, Jensen Session 83 and Peel Session 84.

However, what sets the present item apart from all the other bootlegs with the same content, that were released before, is the astonishing sound quality.

The set consists of two 10" vinyl records, a CD with the same musical content, a t-shirt, a lighter and a certification card.
The two vinyls are stored in a gatefold die-cut cover made of crude craft cartonage, while the CD comes in a generic half-transparent paper sleeve.

The numbering appears handwritten on the inside of the box and on the generic CD cover back,
while the numbers on the 10" sleeves and the certification card are machine printed.

The lid closes by sliding it into a notch.

ALL TRACKS ARE REMASTERD FROM DIGITAL AUDIO BROADCASTING RECORDING IN BEST QUALITY
LTD. 10" OF ONLY 10 ITEMS (CD-VERSION INCLUDED)
On the right side: NUMBER X OF 10 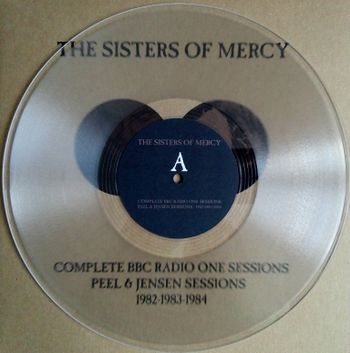 and the respective number of the sides of the records in white lettering on black background.

"THE SISTERS OF MERCY AT RADIO BBC ONE"
This appears in combination with the head and star logo and a compact disc logo.

As all songs underwent the same conversion process, they are still comparable, though now at a lower sound quality than the initial files.

most of these vinyls are near mint, with the exception of Lord Of Darkness, Halloween In Arkham and Jolene bw No Time To Cry, which are very good plus,
and A Black Pack, which can be considered as very good.

- the definition of sound - can the instruments be clearly distinguished?
- the treble sounds, like the hi-hat of Doktor Avalanche - are they sharp, or flat, or even lost completely?
- the pitch.

On the Talk Section you can find some further observations on this arrangment.