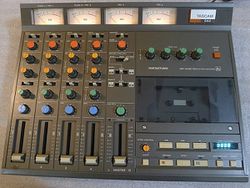 A series of recording sessions, among others for Reptile House EP tracks, that to all likeliness
took place at The Sisters Headquarters of the time at Eldritch's home in Leeds in September 1982.


Even in the field of professional music (as it in the case of the Sisters of Mercy and their Portastudio Demos),
this technique was highly appreciated and finally led to the birth of a whole new genre of rock music characterized
by its minimal production cost: Lo-fi music.

The present demos were used later for several bootlegs such Hard Reign (LP), Before The Flood, Rare Obscurities,
Acoustics From The Beehive which is even subtitled "Portastudio Demos/Floodland Demos", and plenty others.
As a matter of fact all these verions are recordings with a moderate sound quality.

The tracks recorded during the several demo recording sessions in 1982/3 were as follows and mostly appear on the various bootlegs in this order: