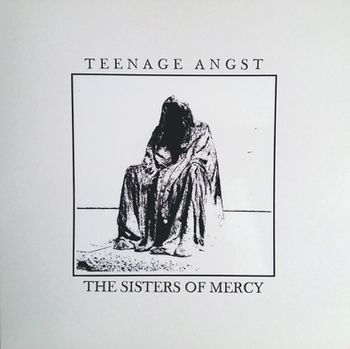 A 12" vinyl bootleg that features selected live cuts, quotes and snippets of interviews with Andrew Eldritch
recorded during the early 1980s.

The distribution of this item was organized in an unprecedented way totally different from other bootlegs
by then. A quiz about The Sisters of Mercy was added as an inlay for the bootleg. Using the services
of modern internet sites, in first place the crowdsourced database Discogs, web users could obtain
one copy for free by answering the questions in the quiz correctly. 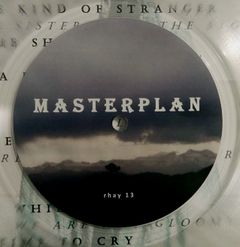 In the lower third of the labels, the catalogue# is printed in smaller, but also white letters.
Both labels are identical and give no information on the actual side of the record. 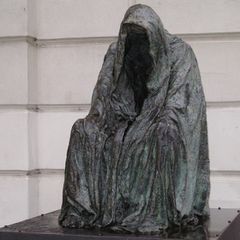 by Czech painter and sculptor Anna Chromý, a motive the artist widely elaborated in her work.
Above and below this print appear the bootleg title and the band name in capitals;
the letters are printed with a lacquer-like paint that is haptically perceivable at a touch.

from the back cover is printed, though here with track times and additional titles of the interviews between the songs.
All this is surrounded by two columns with the quotes from concerts and interviews that were used on this record,
each headed with an old head-and-star logo.

In the lower part of the front sleeve underneath the image, a paragraph with thanks is noted on the right side,
and below in the right corner the rhay creations logo with the wrong catalogue# rhay 15, instead of rhay 13.

On the left side some additional remarks are noted saying:
THESE SONGS WERE SELECTED, RIPPED OFF, SET TO THE RIGHT PITCH, REMIXED, REMASTERED,
AND MERGED AT BIKE STUDIOS IN THE CAVE WITH A LITTLE HELP FROM DELUXE AND MARWOOD.
IF YOU'D LIKE TO SEE FOR REAL ALL THE IMAGES 'TEENAGE ANGST' CONTAIN, YOU WOULD HAVE
TO GO FIRST TO A REALLY GOOD RECORD SHOP AND THEN VISIT SALZBURG, MORCAT AND RODELLAR.
JESUS HAS BEEN THERE.

the songs on the present record are taken. Apart from the reference to these bootlegs and naming the songs used here,
a short but ouststanding excerpt from the lyrics of the respective song is mentioned as well at the side of each picture. 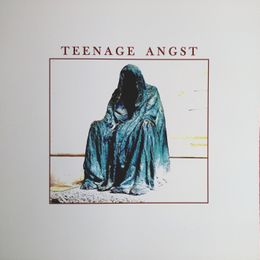 The Insert & The Quiz

On one side it shows a copper green coloured print of the empty draping cloak sculpture in a square
similar to the cover front, but not in that high printing quality.

THIS IS A COLLECTOR'S ITEM RELEASED BY RHAY CREATIONS - rhay 15 (wrong again).
THERE WERE ONLY 20 RECORDS MADE.
AS THIS LABEL IS A NON-PROFIT ONE, THEY ARE GIVEN AWAY FOR FREE TO
RECORD COLLECTORS THAT LOVE THE SISTERS JUST AS MUCH AS JESUS DOES:
IN ORDER TO RECEIVE YOUR COPY, ANSWER THE FOLLOWING QUESTIONS AND SEND


THE FOUR-LETTER-CODE ALONG WITH YOUR SHIPPING ADDRESS TO THIS EMAIL ... 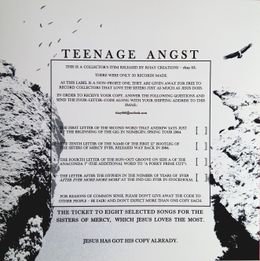 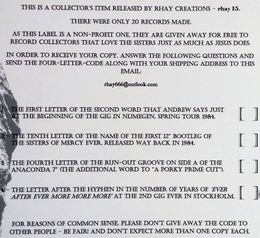 Teenage Angst - Detail of the quiz

The Quiz & The Answers
These are the questions and their solutions that compose the four letter code:

Andrew says "Hello there", so the letter is "T". You can proof it on this site.

It is the Psychedelic Session LP, so the letter is "I". Look it up on this site.

The Word is "NOTHING", so the letter is "H". Check it on Discogs.

Andrew sings at this concert twenty-six years, so the letter is "S". You can read it on this site.

THE TICKET TO EIGHT SELECTED SONGS FOR THE SISTERS OF MERCY, WHICH JESUS LOVES THE MOST.
JESUS HAS GOT HIS COPY ALREADY.

Worldwide the bootleg finally got spread to: 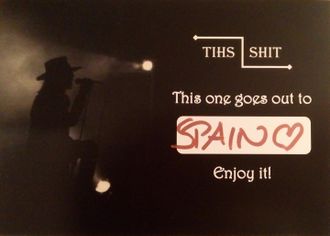 Teenage Angst - Dedication Postcard (front)
Here from a copy that went out to a Spanish fan.

an A4 letter and the A5 rhay creation mail order sheet.

On the other side there is a picture of The Sisters of Mercy in darkness and fog on stage,
i.e. a photo print of Andrew Eldritch in his stage cloth of the 1980s, and a handwritten
dedication naming the country of destination of that indivual copy.

and the signature of the sender are added in handwriting to each copy.

The following sound examples are low quality mp3 files and stored here only to give an impression of how the interview snippets and the songs are arranged on the LP.

Two complete high-quality sound files of the entire record (side A and side B) are in circulation among the fanbase.


Interview with the Bootleggers

For an interview, we've led with the bootleggers, please check the Discussion Page of this site.