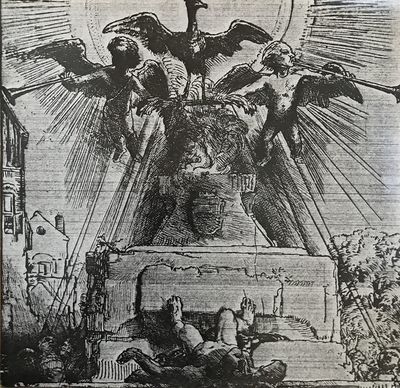 A 12" vinyl bootleg, recorded live during the Trans-Europe Excess Tour in 1983.

At that time, a few months before the acutal release of the Temple Of Love single,


The Sisters Of Mercy would occasionally perform this song during their gigs, though not at every


concert. Relatively soon after the official release, however, and even in the same year, they stopped


playing it at all, and Temple Of Love was not heard live for a long time.


The song would become a regular part of their setlist again only with Tour Thing I in the year 1990.


for the according product as examples like The Lights Shine Clear Through The Sodium Haze,


Through The Years, Tender Mercies, Possession or the ECHOES VOL 1 7" single clearly confirm.


All these bootlegs were much sought-after straight from the day of their release.


disappointing running time, the A-side - in conclusion - offers a very interesting combination of


songs, particularly due to the presence of the aforementioned Temple Of Love track. 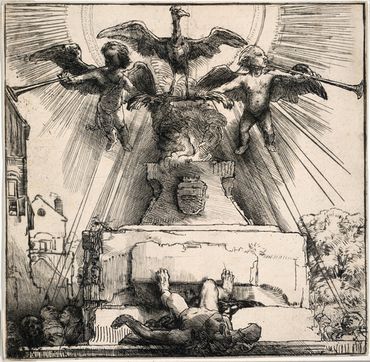 Rembrandt - The Phoenix or The Statue Overthrown (1658)

Live At Kir-Club Hamburg - Spine of the cover

comparing for example the Temple Of Love track here to the versions of other bootlegs
with a recording from the same concert, like Green Eldritch or The Lights Shine Clear. 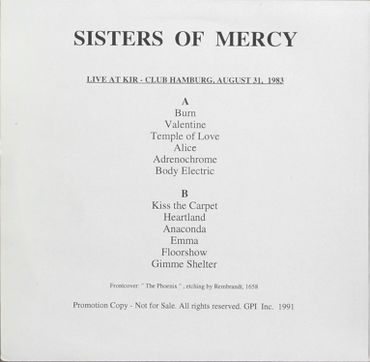 Live At Kir-Club Hamburg - Initial back cover without sticker 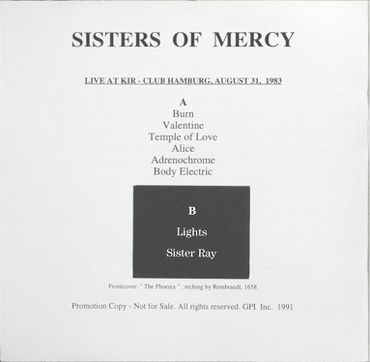 Live At Kir-Club Hamburg - Cover (back)

but has a wrong tracklist for the B-side printed on the cover back. Interestingly,
that track list continues in exactly the order of songs as performed at the gig,
missing, however, the final two tracks "Lights" and "Sister Ray", which are now
present on the actual release. One can only imagine that, initially, the bootleggers
had planned for this collection of songs, but changed their mind later, while the
covers had already been printed and some copies leaked with that "old" cover.

giving the side markers "A" and "B", respectively
The track list of Side B on the cover back now has a black sticker with white print glued to it
naming the actual contents of the record "Lights" and "Sister Ray".

The label on Side B the has the regular "B"-side Merciful Release logo.

and a Merciful Release logo on Side B, .which marked with "C", however, instead of "B".

but so far not even a picture of this has ever surfaced.