The Lights Shine Clear Through The Sodium Haze 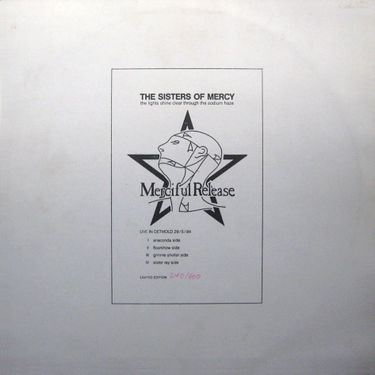 One of the very early double-LP bootlegs on coloured vinyl featuring mainly live tracks from 1983 and 1984,


as well as studio outtakes from The Sisters' second 7" single Body Electric. 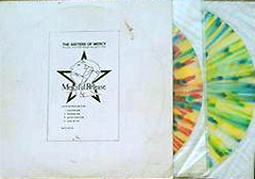 The hand-numbered copies have their numbers partly written in pink and partly in blue colour.

and some basic information on the front as follows:

Often confused:
A Merciful Release aka The Sisters of Mercy
- Cover (front) and black vinyl
LIVE IN DETMOLD 29/5/84
I    anaconda side
II    floorshow side
III   gimme shelter side
IV   sister ray side
LIMITED EDITTION .../600

A Merciful Release, also known as Merciful Release or The Sisters Of Mercy,
although, that bootleg consists of only 1LP mainly featuring the gig @Hunky Dory in Detmold.
Beyond that, a further 1LP bootleg exists titled Mercyful Release. It has the same content
as A Merciful Release but a very different coverart from that one and the one presented here. 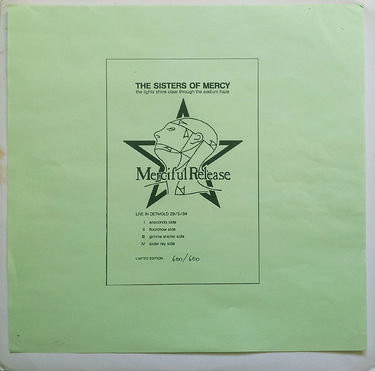 These copy sheets give exactly the same information in exactly the same style as is on the printed covers.
Covers have so far been seen with a copy sheet in red-brown (auburn) or in green (mint) colour.
Of the latter green ones, only 100 copies were made (501/600) as a second pressing.
These pressings seem to be numbered always as 600/600 and mostly come with a b/w insert sheet. 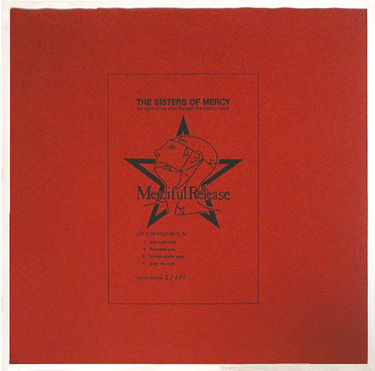 The run-outs found on this version have also been used as the matrix numbers for the Live At Brixton Ace bootleg,
which has led to some confusion going as far as some issues of Brixton Ace being delivered with one record from
The Lights Shine Clear and vice versa, although the contents of these records differed.

You can read more about these aspects on page 14 of The Phantom Twins' Discography booklet
intended to accompany the unreleased Reverberation Across The Nation LP.

Track-info mistakes on the insert

Other insert sheet notes (in German)

Due to its content, the present boogleg is often called Live In Detmold. 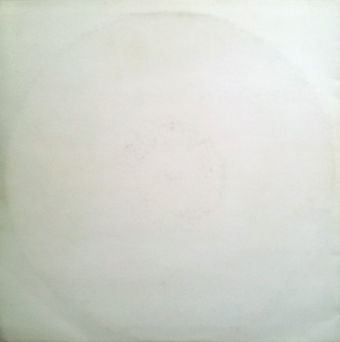 The Lights Shine Clear Through The Sodium Haze
- The cover back is plain white.