There is nothing much known about the release of this bootleg itself. The whole production appears to be relatively low-level with badly glued covers showing the logo in home-printer quality of back in those years. And also the labels are simple and do not give an further information. The reproduced audience recording sounds rather flat and shows some up and downs in the volume regulation, which finally gives the impression of an average sound quality of the end-product.


And that is a pity, given the definitely invaluable worth of the musical content of this bootleg with regard to the chronicle of music of the Sisters of Mercy and the band's history. Read more about that issue further down under Recording Notes. 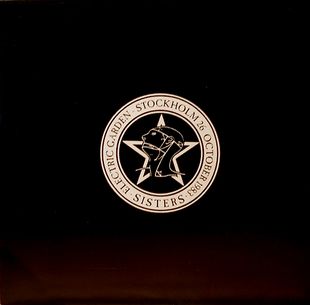 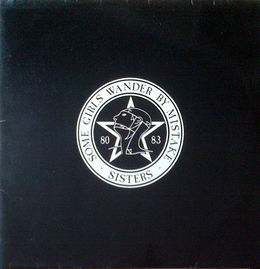 after April 1992, the release date of the official

which served as a blueprint for the front coverart

of the present bootleg. 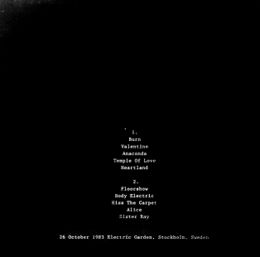 the word "SISTERS" that remained within the logo. At least, though, on the spine
"sisters of mercy" is printed in small letters.

The title of this bootleg it derived from the name of the venue. 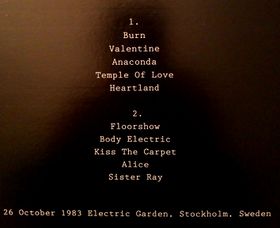 Manchester and Stockholm as well as two times in the USA, Los Angeles and San Francisco in September and October 1983.
This was due to the fact that Ben Gunn had already left the band, while they were still waiting for Wayne Hussey to join them.

Anyway, after all, these two live recordings are the only evidence saved on vinyl of those rare occasions when Gary Marx
was the only guitar player of The Sisters of Mercy on stage.

Maybe this is the main reason for the "flatness" of the sound of the present recording.
However, on the other hand, this release is - again - the only document on vinyl where Doktor Avalanche was not recorded "live", but in "playback" mode.

Some quotes from the gig

From the audience: “Where’s the drummer ?”
Andrew: “He’s in the box. What’s in the basket?”

(The box refers to the tape recorder.)

“We’ve got a new guitarist who can’t be with us today, so next time we’ll be four people.
This is called “Floorshow” and it’s bloody good!”

(The new guitarist would be Wayne Hussey.)

(Confirming the message about this song from the famous concert at Brixton Ace half a year before.)

A few more bits of information around this bootleg and the according concert
at Electric Garden can als be found here at Heartland Forum ...