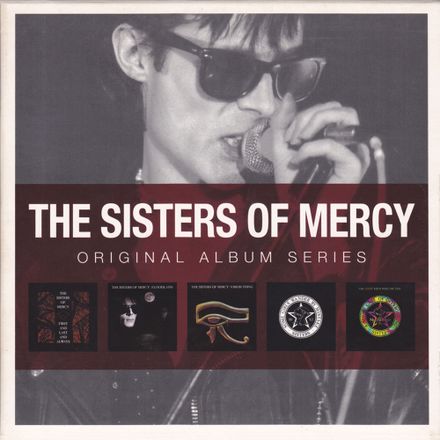 The "Original Album Series" is - according to dicosgs - a series of boxsets containing
up to 5 reissued albums of artists from the back catalogue of Warner Music Group labels.
Meanwhile, over 300 Original Album Series compilations have been released.


The present one is the 5-CD box set of the original albums by The Sisters of Mercy
released by the Warner Music Group sub-label Rhino.

with the original coverart and are alle housed in a cardboard case that is open to the side. 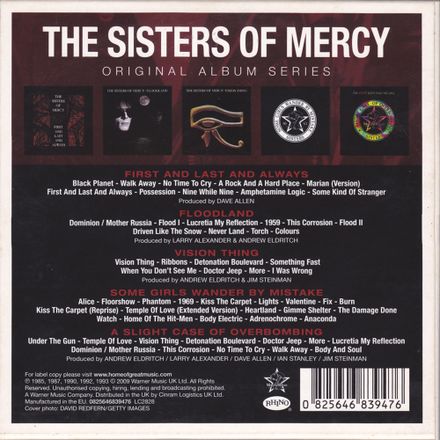 a format-wide photo of the band/artist surrounded with a white frame is horizontally crossed
by an information section sized around one third of the picture and often on the background
of a coloured transparent bar gives the band name, the Original Album Series name and
below some miniature pictures of the albums included in the compilation in chronological
order of release. The location of this info section can vary vertically, but mostly leaves
a smaller part of the photo visible below that section than above.

Here, however, a black background within a white frame is used in place of the photo listing
the albums and their tracklists as well as some additional information on the production.
The album titles are printed in red, while all other information comes in white print.

towards the centre of the format, a Merciful Release logo and below that a Rhino logo
followed by a relatively large barcode section. Barcode: 0 825646839476
Although the Merciful Release logo was used on this release, there has been no involvement
of The Sisters of Mercy in this product. Nor have they been consulted beforehand about it.

First And Last And Always

The first studio album by The Sisters of Mercy was originally released in 1985. The tracks used here are the "Livingston mixes",
which did not appear on the original UK-LP, but were released first on the Japan LP-edition of 1985 - and from 1988 to 2006 on all CD-editions.

The Sisters of Mercy's second studio album Floodland was originally released in 1987. The initial vinyl edition did, however, not comprise the tracks Torch and Colours.

In 1990, The Sisters of Mercy released their third studio album Vision Thing, featured here as CD 3.

Some Girls Wander By Mistake

Some Girls Wander By Mistake was originally released in 1992 and is a compilation of all the early 7", 12" and EP recordings (1980-1983) released by The Sisters of Mercy mostly on their very own Merciful Release label before the involvement with RCA and Warner/EastWest or ELEKTRA. The singles do also mark the days before Ben Gunn left the band and Wayne Hussey joined in.

A Slight Case Of Overbombing

The 1993 release A Slight Case Of Overbombing is a compilation of best-selling Sisters produce and consequently subtitled "Greatest Hits - Volume One".
The two-LP album marks the last studio album by The Sisters of Mercy and does include the song Under The Gun from their so far final single release of the same title.
In addition, the song Body And Soul was released for the first time in CD-format on this occasion.