A rare bootleg from the late 1980s featuring The Sisters of Mercy at their famous concert at the Royal Albert Hall in June 1985. In contrast to the other existing bootleg-LPs of this concert - Blood Money and In Concert At The Royal Albert Hall, this is the only one that contains the whole concert, although in inferior sound quality.

The Quality Of Mercy - Labels of Side A
Left: plain white label
Right: The Amazing Kornyphone Record Label (TAKRL) label 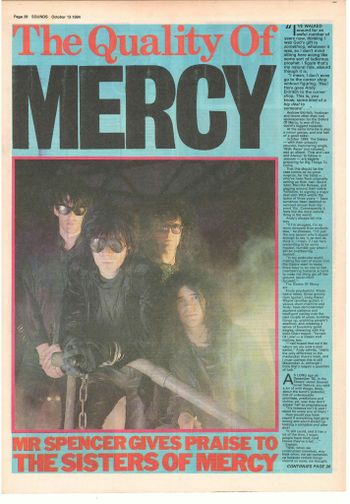 Sounds Magazine, Issue of 13 October 1984, Page 28
There is a certain similarity between the cover layout of the present item and the Sounds article "The Quality of Mercy".

in the remains of their First And Last And Always line-up.

The same picture, though in a way better quality, does also appear on the Revelations bootleg,
which features the concert @York Racecourse in 1984 and was released a year earlier.

The full interview can be found here at the Ultimatesisterguide ...

"MADE IN BELGIUM (c)PROMOTIONAL USE ONLY"