One of the rarer 12" vinyl bootlegs featuring an incomplete recording of The Sisters of Mercy's famous final 1980ies gig at the Royal Albert Hall.

The album was released in two different versions - a first edition with a fully printed, glossy cover that has a quite professional appearance; and a later issue coming in a white generic cover with a black/white A4-xerox glued to it. The latter one has a text printed in Japanese characters in the lower left corner of the cover front and is therefore commonly known as "the Japanese Cover". It is also the more sought-after album of the two as it is much rarer. Nowadays, the "Japanese" cover version can achive high prices in online auctions reaching into the hundreds of Euros. More recently, a "Blood Money" copy appeared with the original cover motive printed in full black on sheets glued to some generic cover, see the pictures down below (scroll). 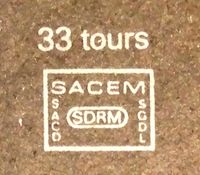 SACEM logo as on the labels

According to the Reverberation Across The Nation booklet, the album was released in 1985 long before
the official Wake video and subsequent unofficial releases. Other authors name 1987 as the release date.

The Reverberation booklet states that this bootleg is an English product, while the "Japanese issue" was a second release manufactured in France. Other authors maintain the Blood Money bootleg were entirely a French release. Their opinion might derive from the logo of SACEM (Société des auteurs, compositeurs et éditeurs de musique) on the labels, (see the pictures on the left side) - a French professional association "collecting payments of artists’ rights and distributing the rights to the original songwriters, composers, and music publishers". 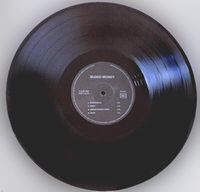 Blood Money - Vinyl (Side B)

which is omitted in the official concert video Wake. It gives the songs in a completely mixed up order, though, and lacks
many important tracks from the gig, in particular First And Last And Always, Marian, No Time To Cry, Walk Away, Alice,
Gimme Shelter and Fix. 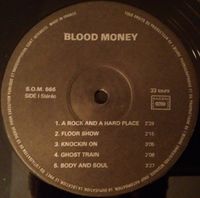 Blood Money - Label (Side A) 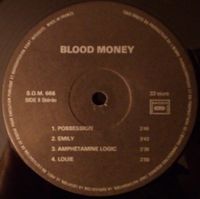 Blood Money - Label (Side B) 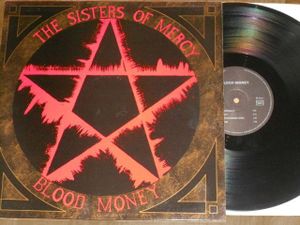 (in the style of old Western movies) on a darkbrown background surrounded by a traditional intarsia wood inlay.
The pentagramm is bounded by an inlaid circle of lighter wood giving the band name and the bootleg title in,
again, red capital letters.

A script typeface looking like a somewhat calligraphic handwriting is used for the information on the cover back,
except for the song titles. 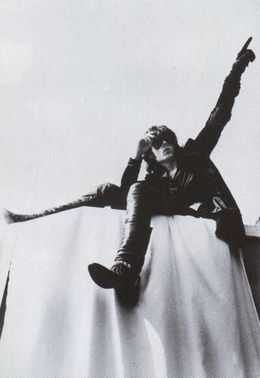 Blood Money - The image used for the Japanese cover

It was originally published with an ELEKTRA biography and information pack in 1985.
The photo itself is credited to Tom Sheehan 1985. 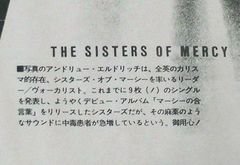 "STEREO" in the upper right corner and
a Japanese text field in the lower left corner.