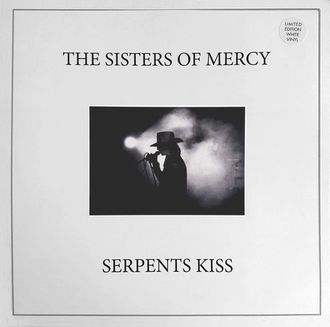 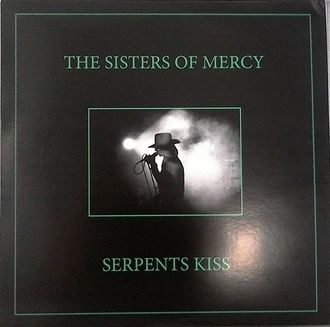 In the history of bootlegs of The Sisters Of Mercy
it's been relatively common that two existent vinyl
bootlegs were combined into one package to form
a "new" double album.


Early productions like these are for example
A Black Pack, Kings And Queen or The Dark,
which was released as a three record box even.


The present release is a similar case; and it was
produced in the cheapest possible way.


The two records combined here are left-overs of
the bootlegs by the same Australian manufacturer
The Garden Of Delight and Ice To The Eskimos.
The bundle was first issued with white vinyls
coming in a generic white cover with two inlays
for the front and the back cover, respectively.

The proof of the above circumstances shows in the identical run-outs, labels and vinyl colours. Also the bootlegger mentioned in online auctions, that this release


"CONTAINS THE LIVE IN NETHERLANDS 1984 LP AS LP 1 AND GARDEN OF DELIGHT AS LP2, REPACKAGED AS THIS",


while claiming the whole thing were an "ULTRA RARE USA 2LP" ...

After selling this low budget release as a first edition, the second issue came with green vinyls in a printed cover showing the same cover art in green on a black background. Meanwhile, both cover versions have been seen with both colours of vinyl, not mixed, though. But other, additional colours of vinyl have been combined for sales (see the pictures down below). Anyway, it is also remarkable, that the price is about double as high for the "Serpents Kiss" releases than for the individual bootlegs together. Compare popsike/The Garden Of Delight and popsike/Ice To The Eskimo with popsike/Serpents Kiss. 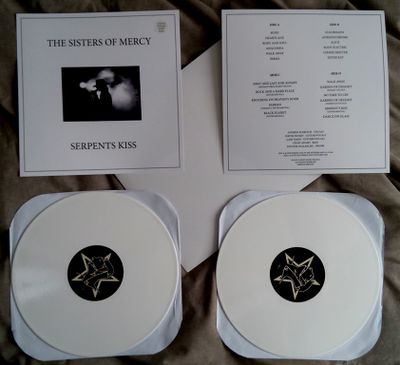 and includes two inlays printed only on one side,
so that they can be fixed to the sleeve as the front and back cover .
The two vinys are white. And on the cover front of these editions
is also a printed sticker saying: "Limited Edition White Vinyl"

housed in a black sleeve with green print. Despite the different colours,
the cover art is the same as used for the first edition.
While sales went on, the vinyl colours changed commensurate to the stock
of remaining records from the two above mentioned single-LP releases.

with "SIDE A/B", respectively, printed in also white letters below it.
There is no hint, though, to whether you're holding record one or record two in your hands
which again is another logical result from the fact that these records were initially sold as
individual bootlegs titled The Garden Of Delight and Ice To The Eskimos , respectively. 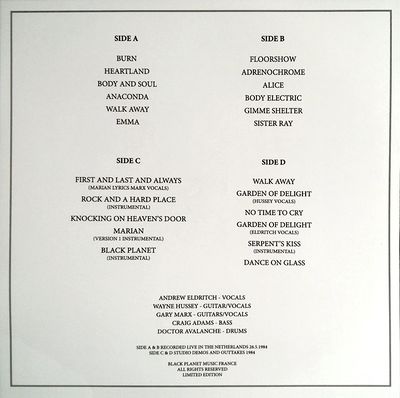