In Concert At The Royal Albert Hall (7") 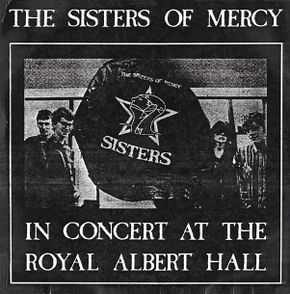 In Concert At The Royal Albert Hall - 7" Cover (front)


and was produced and released at the same time, by the same label and features the same tracks.


Due to the print on the back cover, In Concert At The Royal Albert Hall is widely known


as Knocking On Heaven's Door - Emma.


This is - of course - also the case for A Merciless Release. 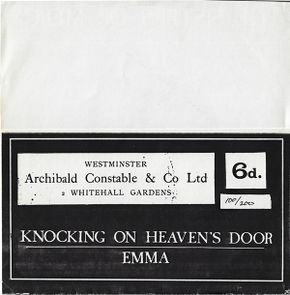 In Concert At The Royal Albert Hall - 7" Cover (back)

looking at a leather jacket that is hanging from a wardrobe and has their bandname and logo on the back.

The printing/xerox quality of the sleeve is, however, so poor that in storage the ink tends to stick to the protective
outer sleeve or other surfaces that are in contact with the cover. 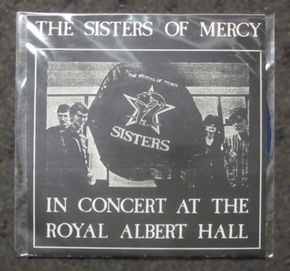 The bootleg is delivered in a plastic jacket.

even as KNOCKING ON HEAVENS DOOR on the a-side label of the vinyl missing the apostrophes.

with yellow labels. Black vinyls with golden-coloured labels are also said to exist, but might well be Merciless Release pressings, initially. No picture has been seen of a Live-At-The-Royal-Albert-Hall black vinyl so far.

the bandname SISTERS OF MERCY (without the definite article), track title, track duration (partly wrong), and
the running speed as 33 ⅓ RPM, which is unusual for a 7" single.