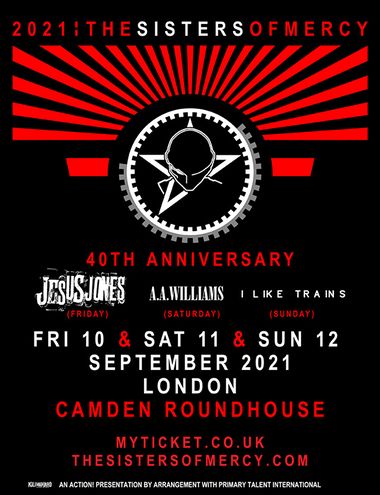 Announcement of the 40th Anniversary gigs with support acts

Unfortunately, the second year of the corona pandemic again shattered all plans for a worldwide tour on the occasion of The Sisters of Mercy's 40th Stage Anniversary in 2021. On March 9th, 2021, eventually, some belated anniversary festivities were announced in the form of an extended three-gig weekend in London at the Roundhouse for September that year.


Some interviews with Andrew Eldritch and Ben Christo were conducted in the days before the gigs by Mark Andrews, who in this respect represented the online music mag Louder.


For each of the three days The Sisters of Mercy would bring a different support act with them. Most of the formerly introduced new songs of 2019 and 2020 were played again and welcomed with utter joy and enthusiasm by the famished fanbase deprived of live concert events for over a year. And the joy was there likewise on part of The Sisters to have the chance to perform at least on these three occasions. Further details on setlists and the distribution of songs are here in the statistics section.


Last but not least, the merchandise front also held quite some surprises arriving with fully new designs. 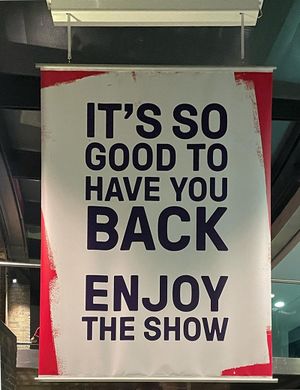 Welcome displays at the Roundhouse

UK only
... which might sound disappointing at first sight, but these were the first gigs of that size allowed in the UK (or Europe, actually) after more than a year of on/off-lockdowns, contact restrictions under homeschooling and home office conditions, travel bans, regular testing, vaccinations, meticulously monitored death rates and uncounted ruined existences all over the culture industry (and not only there). Accordingly, the venue welcomed its visitors with large displays hanging from the ceiling in the foyer like the one here on the right side. And the audiences were likewise grateful and enthralled.

Still no sign of further elaborations on Kickline and also not of Better Reptile. The other two songs introduced in 2019, the new and meanwhile titled Instrumental 86 and Show Me On The Doll now shortened to Show Me, were, however, played again. Never Land (a fragment), last heard in 2016, and Summer, since 2017 seen only once at a summer festival in 2019, were back on the setlist and audibly more welcomed in the videos than other songs allegedly so missed just a minute before... Anyway, every concert started with a different opening track and presented a different combination of 19 songs. In total, 24 songs were performed which included I Will Call You and But Genevieve of 2020 on all three days and Black Sail twice. Remarkably the Vision Thing album tracks Doctor Jeep / Detonation Boulevard, Something Fast and Vision Thing were each played only once in the course of the three sets. Basically, the setlists of the three days regularly consisted of the two pre-First-And-Last-And-Always songs Alice and Temple Of Love; two or three First And Last And Always album tracks (Marian, No Time To Cry and First And Last And Always) - the latter two played only twice -; the five Floodland album songs Dominion / Mother Russia, Flood II, Never Land, Lucretia, My Reflection and This Corrosion; three or four Vision Thing tracks - More, Ribbons and I Was Wrong in every set, and, as mentioned above, Doctor Jeep / Detonation Boulevard, Something Fast and Vision Thing performed only once - PLUS, above all, five or six unreleased songs with Crash And Burn and Summer from the late 1990s (each played twice), the Instrumental 86 (3x) and Show Me (2x) of 2019 as well as But Genevieve (3x), I Will Call You (3x) and Black Sail (2x), all most recently introduced in 2020.

Apart from various stuff available already during earlier tours and still on offer at The Sisters of Mercy's Offical Online Merchandise Store at the time like the FALAA mugs, crescent logo tote bags and MR logo dog tags, a whole new series of six freshly designed lyrics t-shirts plus an according Roundhouse 2021 gigs t-shirt of a similar design appeared. While three of the lyrics t-shirts quoted the songs Temple Of Love, Train and Flood I, the other three featured lines from lyrics of songs unknown at the time of these concerts. Obviously, The Sisters of Mercy had planned for an entire tour on the occasion of their 40th Stage Anniversary in 2021 and had these t-shirts printed and the according songs written and ready for performance already then. During the first part of their Spring Tour in 2022, three of the four unknown tracks were played and the lyrics could be ascribed accordingly. The appearance of the "SISTERS" lettering was, by the way, changed as well and horizontally cut by about the half, like flowers rising out of the ground towards full growth or a turning display doing its course. Outside the venue fake 40th Anniversary t-shirts were seen sold as pictured below.