A two-LP bootleg recorded live during the Black October Tour in 1984. One of the concerts with plenty comments from Andrew Eldritch between songs.

This vinyl bootleg is an "anomaly" with regard to the sound quality of the two existing editions. Only very few bootlegs (if any) show such a tremendous difference in sound quality between editions as is the case here, so that it seems, in fact, reasonable to assume that the second pressing is just a low-quality fake of the original. 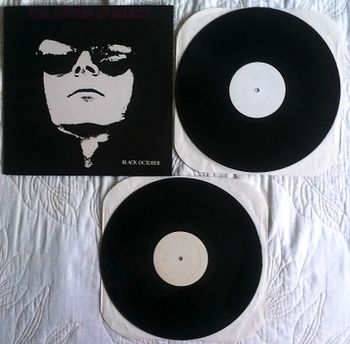 This playback crystallizes from the crowd noise and fades over into the opening track Burn.

See a simulation of the cover art creation down in the image section.

Apart from a test pressing, this vinyl bootleg is available in two editions: 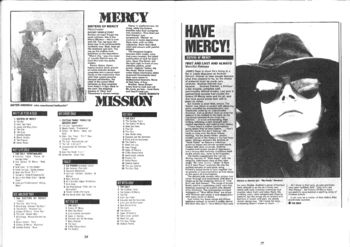 Press snippet with a photography (right) of Andrew Eldritch by "Big Daddy" Sheehan -
This nickname might refere to Tom Sheehan.
This image was the template to the coverart of the album.
(See pictures further down.)
An image of the snippet with higher resolution can be found here

the labels of record two are fully black.

plus some further symbols, most of them crossed out.

There are up and down turns of the volume, one channel is even silent at times.
Skips and bucles, as if the needle had been jumping on the turntable while ripping,
make it seem likely that this second edition is just a sloppy copy taken from the vinyl of the first edition.

See the pictures below for more details.

Simulating the creation of the coverart