Difference between revisions of "Andrew Eldritch" 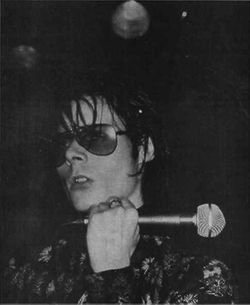 Around 1980, Andrew Eldritch and Gary Marx formed The Sisters of Mercy. On the first single, "Damage Done/Watch/Home of the Hit-men" (1980), Eldritch played the drums, a task he got soon relieved of by the drum machine Doktor Avalanche, allowing him instead to focus on his vocal performance. Right from the beginning, The Sisters of Mercy founded their own label Merciful Release. 1981 saw their first live performance at Alcuin College (University of York), England and a few more gigs in Yorkshire, while the next year already had them touring further around the UK.
...

....
In these early the years, various short-time members left the group, some of them citing conflicts with the frontman as a reason for their departure. .

Following the release of Vision Thing, the band's last studio album to date, and following the according tours, Andrew Eldritch initiated a 1991 U.S. tour of The Sisters of Mercy in a double-bill with hip-hop act Public Enemy in an attempt for cross-cultural understanding. Due to the general situation on the US-festival market a large part of this tour was cancelled by the promoters and The Sisters of Mercy concentrated on their European audiences and would not return to the US before 1998.

Anyway, conflicts with the record company EastWest had effectively set the band on "strike", an absolute refusal to record any new material until 1997, when Andrew Eldritch produced the SSV album "Go Figure", featuring his vocals over drumless electronic music. The album finally freed him from his contractual obligations, as EastWest agreed to waive their claims for two more Sisters of Mercy albums in exchange for the recordings. The SSV tracks were however never officially released. The full name of the band is SSV-NSMABAAOTWMODAACOTIATW, said to be an acronym for "Screw Shareholder Value - Not So Much A Band As Another Opportunity To Waste Money On Drugs And Ammunition Courtesy Of The Idiots At Time Warner".


Andrew Eldritch's work during the 1990s also included vocal contributions studio recordings by Gary Moore and Sarah Brightman. In 1995 he interviewed David Bowie for the German edition of Rolling Stone magazine. Prevented by contractual obligations to appear under his own name, he is also rumored to have produced a couple of techno albums under various pseudonyms during the 1990s, a rumor he would not deny when asked about it.

The Sisters of Mercy tour every year, but no new recorded material has been released for sale since 1993. Despite this, the band continue to debut new material on stage on a regular basis, infrequently playing secret gigs under a pseudonym in their various spiritual home towns.


In 2009, Andrew Eldritch gave his first interview in 12 years to Classic Rock magazine, in which he talked at length about the band's career and denied the need for any new recorded material from The Sisters. And he would keep to this attitude for a long time.


Nonetheless, the year 2019 saw some new songs from The Sisters of Mercy. Not all of which got performed, not to mention released, so far before the worldwide coronavirus surge stopped all public concerts and further developments for a while. However, check here (for example) for the new tracks presented in 2019 and along these pages for the 2020 events. As the 40th Stage Anniversary celebrations of 2021 were limited to three UK-gigs at the London Roundhouse, no new songs were performed during that year. But all that would change with 2022... 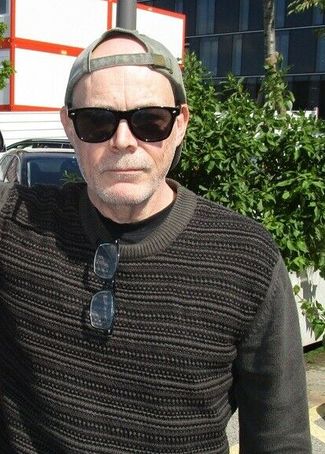 Though Andrew Eldritch is often called the "Godfather of Goth" [2], The Sisters of Mercy (the main artistic vehicle of Andrew Eldritch), despite being formed in 1980, were originally not very popular in the post punk sub-genre that the British press of the early 1980s had labelled, both the artists and their audience, as "Goth". The Sisters of Mercy were, however, accused by the press of plagiarizing Joy Division, who were marketed by their management as "gothic" as early as 1979. [3].