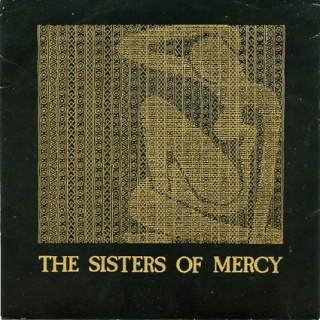 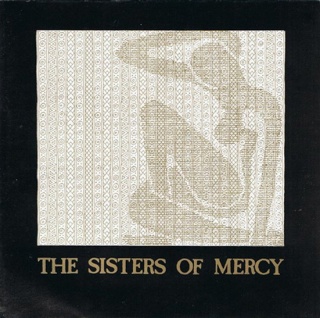 rise and reverberate
Sisters
Produced by John Ashton at KG 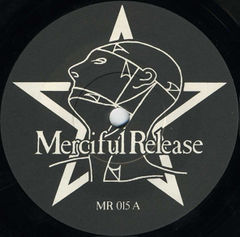 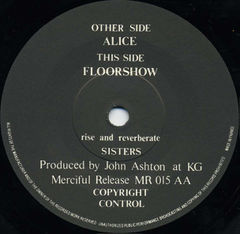 and usually - other than Matisse's original - comes in a golden print on black background.

Several cover versions and reprints exist, see also the pictures down below.

These covers have been seen without a thumb cut and with a wide thumb cut of the cover back.

and has a small text at the bottom of the front sleeve stating "Imprimé en France. GD Imprimerie"

These covers have a small thumb cut on the cover back and to make things worse,
the sides of some of these covers were reversed.

They have no thumb cut and differ slightly in tone.

Anyway, the vinyls inside all of these covers do not differ at all.

These were sold mainly in a set of three together with a red Body Electric vinyl and a black Damage Done vinyl, see Alice 2009.
Anyway, these singles are meanwhile sold individually as well.


and were also broadcast during various John Peel Shows on Radio One and on BFBS:

on that occasion the Alice 7" single reached #27 in that year's Festive Fifty.


under Sisters Mysteries V – did Peel play Damage Done? for more information and some entertaining read on these issues.

Our thanks for these to the First And Last Archive 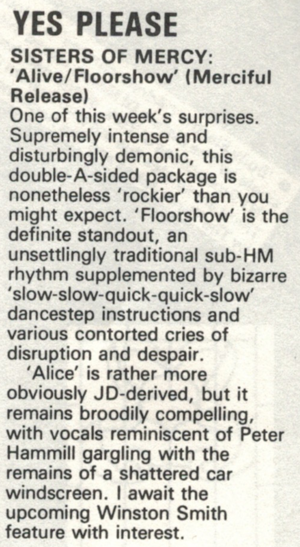 
One of this week’s surprises. Supremely intense and disturbingly demonic, this double-A-sided package is nonetheless ‘rockier’ than you might expect. ’Floorshow’ is the definite standout, an unsettling traditional sub-HM rhythm supplemented by bizarre ’slow-slow-quick-quick-slow’ dancestep instructions and various contorted cries of disruption and despair.
’Alice’ is rather more obviously JD-derived, but it remains broodin compelling, with vocals reminiscent of Peter Hammill gargling with the remains of a shattered car windscreen. I await the upcoming Winston Smith feature with interest.


DO THE APOCALYPSO
(Choose Your Partners)
Foto caption in article on the left: Sisters of Mercy (no relation to New Order) cast a gothic shadow for the lens of Kevin Cummins. (L-R: Gary Marx, Lerch Adams, Andrew Eldritch, Ben Gunn.)

WITH GROUPS like The Gun Club and The Birthday Party kicking the cateleptic body of music around, perhaps it was inevitable that the search for something new would he on.
Enter The Sisters Of Mercy.
The Sisters are five human units: Ben Gunn, Gary Marx, Lerch Adams and Andrew Eldritch — and an all important drum machine.
“We are probably the first people in this country to take the sound of the drum machine and actually do something different with it. If you know how to use them, these things can be immensely powerful.
The Sisters pull out the full verbal swagger, partly through a conviction of their own power and direction, and partly through simple perversity.
Fashion is there to be flaunted, they argue, and they do so delightedly. When I arrive to talk to them they’re running through an old Jimi Hendrix video.
Listen little Sisters, I thought rock was dead.
"That’s the trouble with the press,” they sulk, “they will not recognise that the rock format still has an enormous amount to contribute — as long as it’s approached with the right attitude and an awareness that certain things just can’t be taken seriously.
"People are ready to recognise a smartness and a sense of humour in pop but not rock, which is just as suitable a vehicle.”
The Sisters of Mercy are an intersection of the compelling sex-beat simplicity of DAF and the sparkling spirit (not the junky fascination) of the New York Dolls. They describe themselves as a heavy metal band, but what’s important is that they operate on more than one level.
“Some people like us because we make a powerful noise, some people see us as the thinking man’s guide to the apocalypse,” they say with derision. "And some actually see the tremendous black humour with which the whole thing’s done.”
Black humour but not black magic?
“We could go in for all that imagery, but it’s just the easy way out. It’s a way of covering up the inability of making any intelligent comment. Like the reference to Tarot on the new single says: ‘In illusion comfort lies’ which means black magic is just another illusion that people use to wrap themselves up in and hide from the real world.”
The double A-side single ’Alice’/‘Floorshow’ is a devastating scream.
A follow up to the highly acclaimed ‘Body Electric’ and their best forgotten debut. it’s the purest expression of the Sisters’ promise so far. They insist, though, that this is only one side of them.
“We regard records and live performances as being two different aspects of the whole thing. Each can be taken on their own, to really understand what the band is trying to do, you have to see both sides.“
At London’s Imperial College, in front of an unsuspecting crowd of students. they expose the live wire. where the records restrain the power, the live sound takes it to almost ridiculous levels, as the band teeters on the edge of parody.
Andrew, starved and spindly, coils around the mike, Craig affects disinterest and rolls out an ominous wash of bass, and Ben looks bemused. The drum machine cuts through the top of your head.
The audience becomes a mix of bouncing psychobillies, restrained consideration and open antagonism.
"We always do that to audiences, there’s always the three distinct groups. We always get cut and dried reactions.”
My reaction? The Sisters of Mercy are not the answer but they make an invigorating antidote.
My advice to you? See them!