The Damage Is Done

This 12" vinyl bootleg features basically two concerts from different eras of The Sisters of Mercy's evolution through their early years.


Side A contains one of their first concerts, performed in 1981 and the first one ever to be recorded, and gives - most likely as a further incentive -
a 1984 version of The Sisters cover of Gimme! Gimme! Gimme!, a track that went down very well with the audiences at the time, but was performed
live only on very few occasions. Side B features part of a concert at Odeon, Münster, Germany during the Trans-Europe Excess Tour in 1983. 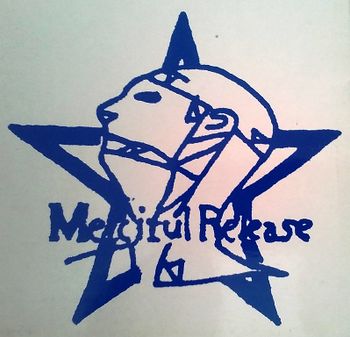 Detail of the hand-drawn Merciful Release logo on the cover

Tape and Artwork by Clever Man
Special Thanks to: Uschi the Bisquit, Clever Man, Marion and all
lovely Girls over the World, we love them all.

A1 - The Damage Done is mentioned as "Damage Done"

A3 - The Teachers/Adrenochrome medley is listed as two separate songs

B2 - Valentine is misspelt Valentime

B3 - Anaconda does not appear in the track list at all. 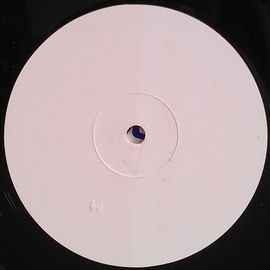 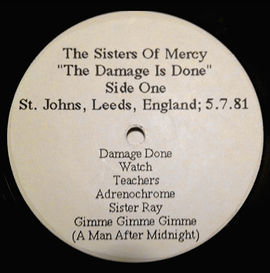 Printed white label (Side One) 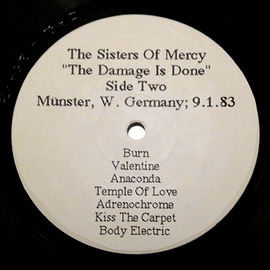 Printed labels with track and recording information have, however, surfaced as well (see pictures on the right side)
An interesting detail with these labels is that the songs are listed nearly correctly and even Anaconda appears.

On the other hand, the sound quality of side B is rather fair.

and includes an LP, a cassette, an inlay sheet and a discography booklet.
The content of the LP is identical to the present one, but the cover and the design of the box differ completely.

This recording is not complete and the order of the songs does not match the set list.
As far as we know, the before mentioned box set The Damage Is Done Part 1 & 2
does feature the whole concert, as the missing songs are recorded on the cassette.
Nevertheless, the order of tracks there is not the one we think correct, neither.