Part of The Sisters' Armageddon Tour 1985... and another gig on the birthday of Andrew Eldritch.
As the latter turned 26 on that day, the according line in First And Last And Always, which usually started the gigs during that tour, also changed from "25" to "26". Thanks to Spiggy Tapes a still video of this performance of the song is available for a listen on YouTube (or here on the right side).

An audience recording from the concert is in circulation among the fanbase.

For some more interesting information on this gig including some lovely photos, we recommend the entry Who put the Goth in Gothenburg – May 15th 1985 in the I Was A Teenage Sisters of Mercy Fan blog. 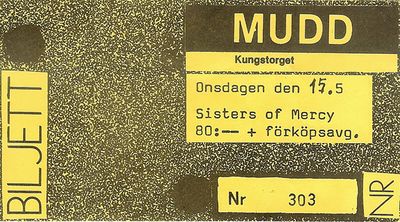 Ticket  * Thanks for this picture to Heartland Forum member brunobossier