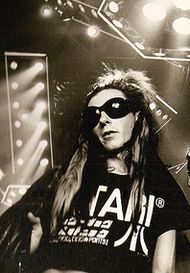 Tony James on the cover of Vision Thing


Before the Sisters, Tony's bands included Generation X and the *ahem* seminal Sigue Sigue Sputnik.
At the time when Tony was putting SSS together, he approached Andrew Eldritch to be the vocalist,
who rejected in favour of The Sisters of Mercy.


Some people suggested that Tony's later recruitment to The Sisters was a similar move to the recruitment
of Wayne Hussey in the mid-80's - a deliberately provocative move that the fans would not necessarily
understand and possibly even strongly dislike.

With The Sisters of Mercy Tony James played on their most recent studio album Vision Thing and during
the subsequent tour(s) in 1990 and 1991. An so he was of course also a member of the Speed Kings,
see Speed Kings 1990and Speed Kings Live 90. 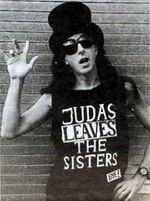 Numerous bootlegs from the early 1990s like The Neon Dream, Germany 1990, Black Visions,
Satanic Verses and plenty more feature him on bass. 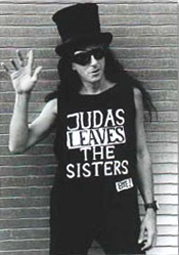 With the Vision Thing album, Toni James also played on the according singles More, Doctor Jeep,
When You Don't See Me and the official Elektra Detonation Boulevard and Tour Thing 91 promos
as well and can also be heard on various tracks of the 1992 released Temple Of Love single.


In addition he appears in the related music videos of the time for the tracks More, Doctor Jeep and
Detonation Boulevard as well as in the revised video collection Shot Rev 2.0, all of which were released
not before 1993.


Tony James' last gig with The Sisters of Mercy was Winterthur Festival, 31 August 1991. He left the band, apparently amicably, and and bass-playing duties were turned over to Doktor Avalanche. Check here for
a press review on the occasion of Tony's departure stored in the depths of the Heartland Photo Gallery.


The Sisters have not since had a full-time bass player again, although one or other of the various guitarists have played bass on occasional live songs. 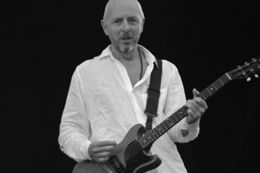 After leaving The Sisters of Mercy, Tony James became a founding member of Carbon Silicon.


On the occasion of Tony James' departure from The Sisters Of Mercy, the following excerpt was printed in the first edition of UTR.