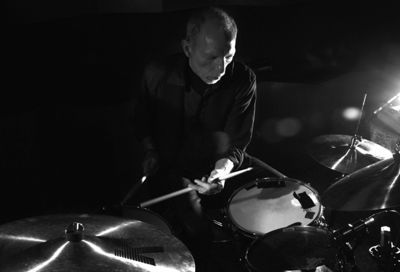 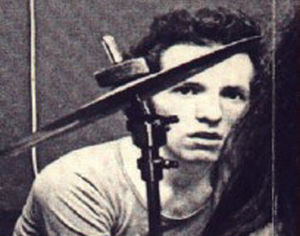 For six months, Lucas Fox was the first drummer of Motörhead before he was replaced in the middle of the recording sessions for their first album by Phil "Philthy Animal" Taylor.


The only studio recording that Lucas Fox did with Motörhead can be found on their album On Parole.

Some more information on Lucas Fox and his musical career can be found at wikipedia. We recommend you check also his discography at discogs.

Lucas Fox and The Sisters Of Mercy - or The Sisterhood, resp.

In 1986, Lucas Fox was involved in the production of The Sisterhood single Giving Ground and the ensuing album Gift,
where he did the vocals on Colours, Finland Red, Egypt White and the lead vocals on Rain From Heaven.

Eldritch decided to secure the rights to The Sisterhood name as quickly as possible.
He registered a company under the name and prepared a record to be released on his own label.


In only five days Eldritch recorded a song called "Giving Ground" which he co-wrote with Merciful
Release manager Boyd Steemson and co-produced with Lucas Fox. Fox and Eldritch had met in
spring 1985, when Fox was the stand-in drummer for the Australian support band The Scientists
on The Sisters' UK tour.

At the end of The Sisters' Spring Tour Tune In... Turn On... Burn Out in 1985, Lucas Fox was invited
by Andrew Eldritch to join The Sisters on stage and sing with him Knockin' On Heaven's Door,
see the lovely still video here on the right side (with thanks to the uploaders).