A Bootleg Box Set with a 7" picture EP of the Reading Festival in 1991, most probably based on an Audience Recording.
As far as we know, at least five different audience recordings of this show have been in circulation over the years. 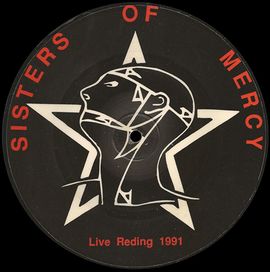 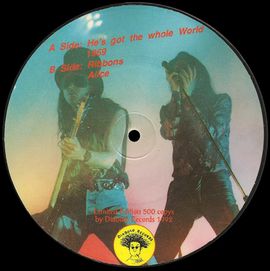 It also has a red sticker on the front, which is hand-numbered up to 500.

but the red sticker is not numbered anymore or even missing.
It is not known how many boxes were made of this edition.

There, a paper strip in the shape of the banderole is glued onto the cardboard box.
The printing and arrangement is very similar, but the title of the EP is misspelt as "Reding '91"
The red sticker is missing and the numbering appears handwritten on the paper strip. 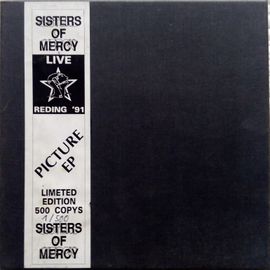 Oddities of this Release

but in Bremen 1984 and is a detail of one of the pictures in this collection.

from Reading Festival. (Andrew Eldritch had a short hair cut then.)

the version of He's Got The Whole World In His Hands,
which was only performed once in Sisters History - here, at this festival.

Some more information about "He's Got The Whole World In His Hands" can be found in the song's page.