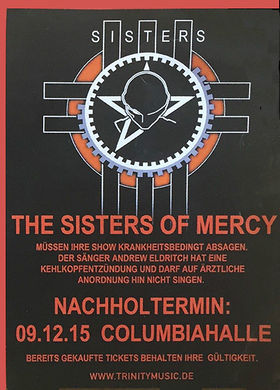 As Andrew Eldritch fell ill again after The Sisters concert at Gazi Music Hall, December 6th, 2015 in Athens, Greece,
this concert was, unfortunately, postponed again to Thursday, 10 March 2016, just like the other gig in Germany
that was planned for Cologne on 8 December. The latter was also moved again, this time to Tuesday, 8 March 2016

The Sisters Live News page read at the time:


It is with a heavy heart that we have to postpone the December Köln and Berlin gigs again. Huge apologies to all.


These shows have been rescheduled for 8th March at Köln Palladium and 10th March at Berlin Columbiahalle.


Andrew Eldritch has had a recurrence of the viral laryngitis which forced us to postpone these gigs on the last tour,


and has consequently lost his voice. The same doctor as last time saw him, and recommended again he does not


sing for a week. Refunds for anyone who can't make it to the rescheduled shows are available from point of


purchase. Once again huge apologies to all who had hoped to attend, and to our promotors FKP Scorpio.