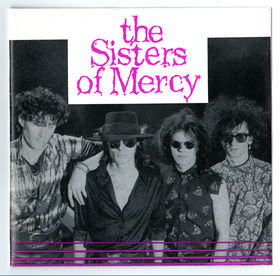 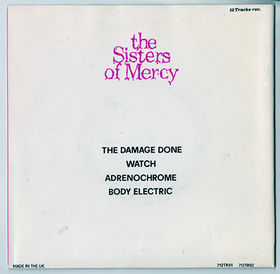 The Damage Done - Adrenochrome - Cover (back)

A double 7" bootleg single from the later 1980ies featuring the first two singles of The Sisters of Mercy.


The outro-track Home Of The Hit-Men is, however, omitted from Record One.

while the other half makes the actual single cover. The unfolded back of this poster is unprinted and plain white.

No evidence for this has yet been found.

It was issued, however, under the different label Primary, while its entire look is almost identical to the present one.
Also, the Primary edition was released with either a pink or a blue cover,
and it is not known to-date whether this was also the case for The Damage Done - Adrenochrome.