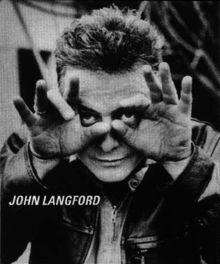 Jon Langford in the early days

Jon Langford was a founding member and the drummer of the Leeds-based band The Mekons, who were good friends with The Sisters of Mercy. He was and is also a member of the legendary Three Johns.

In 1981 and 1982, Jon Langford stepped in for a few live gigs with The Sisters of Mercy, temporarily replacing original band members. On one of these occasions, he played the synthesizer, while for a later gig on Friday 5th, 1982 he took over bass duties for Craig Adams.

Together with The Sisters of Mercy, The Mekons and various other bands from the Leeds-area music scene of the time are also featured on the 1985 compilation LP They Shall Not Pass, which was dedicated to the striking miners and their families.

It is also a rumour of the old times that The Mekons lyrics to Prince Of Darkness refer to Andrew Eldritch. For some detailled information on this issue, please check this lovely interview with Jon Langford by Zach Lipez @C L R V Y N T.


Another interesting read about the collaboration of Jon Langford and Andrew Eldritch is here under Eldritch and The Botha Boys ? on the well-known I Was A Teenage Sisters of Mercy Fan Blog 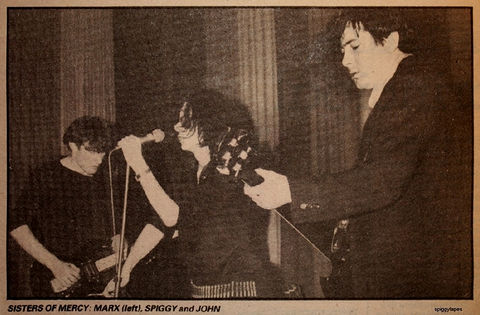 Jon Langford on stage with The Sisters of Mercy
- Vanbrugh College, York University, 5/2/1982 -

During his long and ongoing musical career, Jon Langford has appeared

For additional information about Jon Langford and his manifold musical undertakings,

* Our endless thanks for the press snippet on the right side go to spiggymr7.