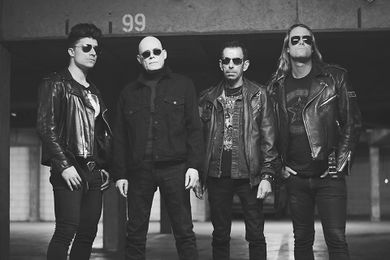 During the worldwide "zombie apocalypse" coronavirus lockdowns, which had


ended The Sisters of Mercy's Europe Spring Tour of 2020 after only four UK-dates,


the band turned to writing further new songs instead of touring.

After five new titles were added to the list on the official Live News Page on April 25th,


The lyrics to Eyes Of Caligula, which had been announced in the run-up to the 2020 Spring Tour,


and Six Ways To Sunday followed the next day .


The song is credited to Ben Christo, Andrew Eldritch and Dylan Smith.


can be found @The Heartland Forums from around here or in the Lyrics section.

no new jerusalem
there is no us; there's only them
this is not my map at all

wrapped in sugar for her pains
no, she says, I'm wearing stains
she do mascara fail
there is a wall and you will wail

we had wool and we had steel
we had liverpool, not ever much your england
now the chrome and we should kneel
in a home where we're not real
eyes of caligula look on

Lyrics and music are property and copyright of their respective rights holders and provided only for study purposes.