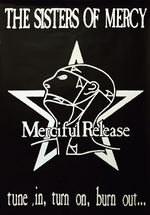 The date of this rather famous event was the 2nd of April but was debated occasionally over the years,


as the first broadcast of this feature took place on April 4th, 1985.


This TV appearance followed directly after The Sisters of Mercy's Tune In, Turn On, Burn Out... Tour of the UK in spring 1985.


An audio recording of this TV appearance can be found - for example - on the CD bootleg ECHOES VOL. II.

This event happened to be the last official performance ever of founding member Gary Marx with the band.

The Sisters of Mercy live at the BBC's Old Grey Whistle Test on April 2nd, 1985
* with many thanks to the original uploader