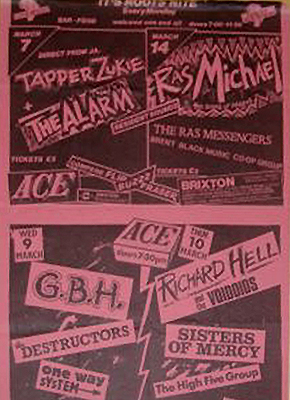 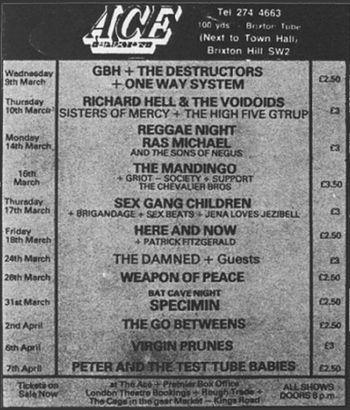 Back of a tape allegedly featuring the gig

The Sisters of Mercy and The High Five Group opening for Richard Hell & the Voidoids.

For a long time, there were lots of doubts about this event.


The concert and some further upcoming gigs of The Sisters of Mercy had been, publicly announced at BBC Radio One during the broadcast of the Kid Jenson Session on the same day.

Thanks to our kind supporters at @The Heartland Forums we are pleased to present you also with the newspaper announcement here on the right side, the flyer on the left, and below, the picture of the back of a tape with a recording from this gig.


Research and examination for verification have proved that the actual content of that tape is a rip from the Halloween In Arkham bootleg-LP (Brixton Ace, 19 February 1983) on Side A, and on Side B indeed a mixing desk recording of top sound quality from the present show.


The relatively famous live bootleg-CD Monochrome had, btw, also always beed ascribed wrongly to April 6th, 1983 as the recording date. It actually features the mixing desk recording from the present date (10/03/83). However, this recording misses the song Valentine.


An audience recording of very low sound quality includes Valentine, but due to the low quality, it has not made it into fanbase circulation. The mixing desk recording from the cassette mentioned above is available on said Monochrome bootleg and as such in circulation. Anyway, added here's an Eldritch quote from the gig:   Sometimes I wonder why we do soundchecks ...

Meanwhile, a short still video has appeared on this pretty channel at YouTube that we embedded here on the right side. It gives an impressing excerpt from this show and features the song Burn.

NOTE: It is not 100% clarified, whether further tracks were played before Valentine