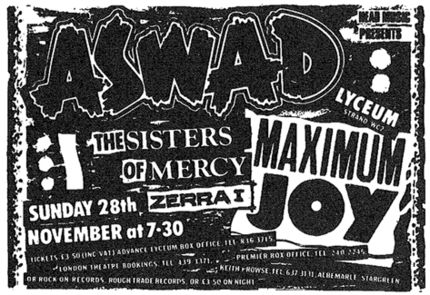 Old press avert for the gig

Also on the bill: Aswad, Maximum Joy, Zerra I


As The Sisters of Mercy had played quite a few gigs in London that year,


does exist and is in circulation among the fanbase.

Our thanks for these to the First And Last Archive


SISTERS OF Mercy are four in number; two guitarists, a bass player, a singer and a drum machine.
They rumble along doing amateurish impersonations of anything from the Stooges to the Birthday Party.


All their songs sound virtually identical. It would appear to be the band’s own lack of vision and narrow
sense of dynamics, rather than the simple limitations of a drum machine, that causes their offerings to be
so unimaginative.


Admittedly, they are a slight novelty. They are different from the average slick-dressed, hi-tech funktionaries
that seem to occupy every support slot in London these days. I prefer the sound of the Sisters Of Mercy to the
likes of Ultravox and all the Flocks of shitting Seagulls in the world but Sisters Of Mercy have as much sham
as those others have pomp. They seem keener to foster an effect, glorifying best forgotten rock myths.


This is real ham stuff. The singer dresses himself in black and sports fashionably unfashionable long hair.
He wails in a grandiose monotone while pouting and posing with a degree of emotionless perfection that can
only be achieved after many year’s practice with the bedroom mirror.


As if to illustrate my points, they finish their set with a shoddy version of the Stooges ‘1969’. Now I would
have loved a zestful, sacrilegious romp but they treat the piece with such obvious reverence and awe, all
that emerges is a highly mannered pretence of brutality.


Good thing I told Iggy not to come. I stormed to the bar to seek the buyer of my next drink.


Maximum Joy have tightened up considerably and now have a more sparse, funkier sound than either
previous glimpses or hearings of their album would suggest them to be capable of. The lazy, loping brass
that used to sprawl across their material has been severely reduced and the result is generally more snappy
and active.


Yet, while they appear to be enjoying themselves, there is this clogging air of worthiness hanging over them.
Plus, of course, the inescapable bitter truth that they’ll never avoid being consigned to the arse-end of the
sub-Pighead jazz brigade.


Realising how bored I was becoming, I once again strode barwards to seek relief for my raging thirst.
Before long I was falling about in glassy-eyed delirium. I puked up, nutted a bouncer, got thrown out and
spent the night in a nearby gutter.