Ticket stub        *with many thanks to DJ Sullivan 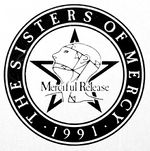 An audience recording from this concert is in circulation among the fanbase.


dedicated to Danielle Dax, please check down below. 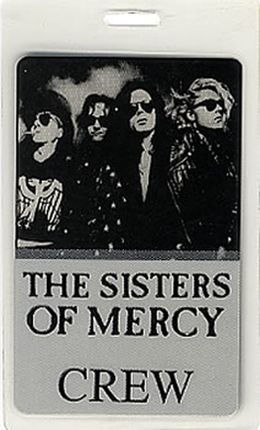 Sisters of Mercy Come Back, With Their Old Dark Habits - The Boston Globe. April 1, 1991 by Jim Sullivan


The Sisters of Mercy. Playing live on Good Friday.

Is this cutting-edge chutzpah or what? Is this a devilish rock 'n' roll-cum-marketing dream of a scheme? Is this something that could only be hatched in the mind of a skilled provocateur like the ever-sunglassed, deep-voiced, semi-dangerous, Jim Morrison-esque singer-songwriter of Andrew Eldritch?

Perhaps. At any rate, the dark and doomy, hip-all-over-again Sisters of Mercy - launched by Eldritch and a different crew of players in the early '80s in Britain - made their first US apppearance in more than five years at Citi . . . on Good Friday. These Sisters - four guys and a drum machine called Dr. Avalanche - not only play secular music, they play an aggressive, agitated, sensual sort of piston-pounding, mid-tempo rock 'n' roll that is as ironically opposed to basic "good-time" rock as is their moniker to the tenets of the Catholic Church.

In all likelihood, the Easter-Passover timing is probably less a contrivance or sacrilege than it is coincidence: A band's gotta tour when a band's gotta tour. The new disc, "Vision Thing," is hot, and Eldritch has been plowing this minefield for years. It's a minefield of simmering tension, torturous screams, scattered explosions and a lot of emotional damage. It's only now - after several excellent, ferocious early import EPs, followed by a dull US debut album and a boring tour in the mid-'80s - that the revamped Sisters are making a major mark. They're huge in England and Europe, and they're poised to do something similar in the US. They sold out Citi well in advance of Friday's 17-song, 95-minute set and, in California, they're headlining a 12,000-seat venue.

Could the Sisters of Mercy be the next alternative-to-mainstream mega-crossover?

Don't count 'em out. Frankly, with songs like the disarmingly lilting and uplifting "Detonation Boulevard," the hypnotically swaying and sexy "Corrosion" and the angrily thrashing, cathartic "Vision Thing," they may, indeed, make the climb. The Sisters churn out moody, hard-edged, industrially tinged rock that's not far removed from that of Nine Inch Nails. Live, the Sisters aren't nearly as charismatic - Eldritch's idea of showmanship is to get lost in a chemical smoke fogbank and twitch - but the music's got all those key post-punk ingredients: tension, release, surprise, edge, crescendo, hooks. Two effective covers Friday: the Rolling Stones' festering, yet triumphant, "Gimme Shelter" and Dolly Parton's (!) "Jolene," an eerie, pleading love song that Rubber Rodeo once reworked - and that, I swear, must be the source for the Sisters' version. And one superb blast from the Sisters' own distant past, "Alice," a raving prototype for Eldritch's world-in-chaos aesthetic, boiled down to the fate of one desperate woman.

The odd thing about the Sisters' show was that, for all the good stuff - the lurking menace, the erotic undertow, the regained melodocism, the surging guitars of Tim Bricheno and Andreas Bruhn, the taut bass of ex-Sigue Sigue Sputniker Tony James - there was also a nagging static quality. Chalk it up to the unrelenting drum machine, which is not unrelated to Eldritch's penchant for a particular mid-tempo, early Stooges-styled swagger. So the music would sporadically bog down as the fog billowed and Eldritch growled. Yet, by the end, unlike the Sisters' last trip through town, you were with Eldritch's dirges-and-more program. "Something Fast" had an early-'70s Bowie-esque structure and stature - boasting melodic grandeur, quiet interludes and lyrical negativity - and "Vision Thing" brought it all back home with alternating blast of resignation and rage - harsh political and personal thoughts about the world in which we dwell. The Sisters of Mercy: Long may they brood.