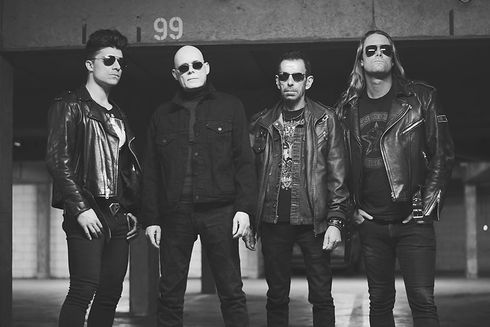 After the Summer Festivals and the worldwide National Treasure Tour in autumn 2019 introducing new guitarist Dylan Smith and three new songs (Kickline, Better Reptile and Show Me), The Sisters of Mercy toured again in 2020.


A new band photo, the view of further new tracks and the announcement of around twenty hall concerts and five festival gigs in the UK, Belgium, The Netherlands, Germany, Switzerland, Italy, Spain, Poland and Greece sparked hopes for utter pleasure and joy and filled the fanbase with excitement.


As support acts were confirmed A.A.WILLIAMS for the UK concerts and Hugs of the Sky for all other gigs except the festival dates.


The tour started in Manchester at the Albert Hall on 7 March 2020, where the audience were presented with two new songs, But Genevieve and Black Sail. The following show in Bristol saw a third new track titled I Will Call You. Soon various compilations made from videos of the four UK shows would spread and the forthcoming gigs looked entirely promising.


Then the corona virus hit in and the ensuing lockdowns brought everything to a halt.

●  Ravey Davey - nurse to The Doktor 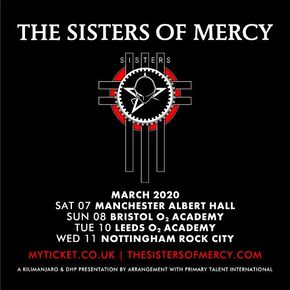 Announcement for the four UK-gigs in 2020

And that was the end of the tour, as the corona zombie surge made the whole thing stop for a while.


Most of the five festival gigs were cancelled either immediately or later on during the following two years of lockdowns all over the world.

Three new songs were performed live for the first time during this part of the envisaged tour.

A good part of the merchandise from the National Treasure Tour 2019 was still available at the gigs in Spring 2020 partly belonging to the standard programme on offer at the time withThe Sisters of Mercy's Offical Online Merchandise Store, such as the First And Last And Alway album motive mugs, the crescent logo tote bags, the Leeds England enamel badge, the logo pin badge, the official Head-and-Star logo dogtag, and on the clothing front the Merciful Release II shirt, the Utterly Bastard Groovy shirt with the kissing-and-the-colour print on the back, the Star Logo Ladies slub t-shirt , the Black Logo sweatshirt and the Classic Logo hooded sweatshirt. Beyond these, a selection of badges and the crescent logo beanies were sold during this tour, and, of course, the according tour t-shirts, which had the new head-and-star logo with only four prongs on the front side and the initial tourdates from Manchester to Madrid on the back.

Last tour's new tracks Kickline (still without any lyrics or further play since its introduction at TRIX in Antwerp) and Better Reptile were not heard again this year. Fully removed from the setlist were also Arms, We Are The Same, Susanne, When You Don't See Me and Vision Thing, while Lucretia became the opening track for the shows remaining of this tour and was replaced only in Leeds with the new song But Genevieve. But there, Lucretia was added to the encore, which thus consisted of four songs instead of the three of the other shows. However, this tour seemed to become the one with the shortest set ever (except for festival gigs) - a main set of basically 15 songs plus a three-track encore, Bristol (16+3) and Leeds (14+4) slightly meandering around this line. The Bristol folk could count themselves happy, anyway, as they were the first to see I Will Call You performed live and still could enjoy all the other tracks. After this show, Something Fast was cut from the setlist. Leeds, on the other hand, saw the only performance of Crash And Burn this year. The middle part of all sets was the same, presenting an all-common sequence of the songs Alice, Dominion / Mother Russia, Show Me (a new track from 2019), Marian, First And Last And Always, the new Instrumental 86 (2019), the entirely new song Black Sail and the all-time welcome I Was Wrong as well as Flood II, (after the departure of Something Fast).